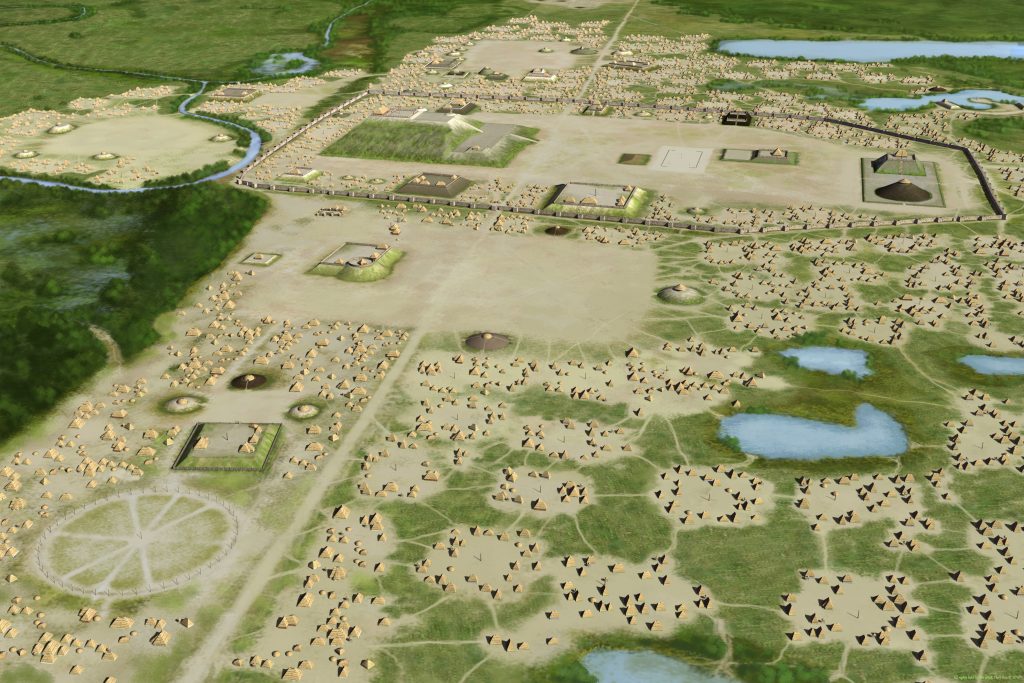 “When I reached the foot of the principal mound, I was struck with a degree of astonishment, not unlike that which is experienced in contemplating the Egyptian pyramids. What a stupendous pile of earth!”

“I everywhere observed a great number of small elevations of earth, to the height of a few feet, at regular distances from each other, and which appeared to observe some order; near them I also observed pieces of flint, and fragments of earthen vessels. I concluded, that a very populous town had once existed here, similar to those of Mexico, described by the first conquerors. The mounds were sites of temples, or monuments to the great men. It is evident, this could never have been the work of thinly scattered tribes.”

We are engaged in a collaborative set of inquiries to understand the historical effects of this singular ancient phenomenon and its relevance for our 21st century world. Our research seeks to understand how the Cahokia that we can still see today came to be, some nine centuries ago, and how it changed the known human and nonhuman world of the Mississippi valley centuries ago. Four projects make up our collaborative effort: the Emerald Acropolis Project, the Cahokia Initiative, the Richland Analysis Project, and the Mississippian Initiative. All are pieces of a larger puzzle of the rise and fall of greater Cahokia, its ancestral settlements, religious shrines, related support colonies, and later towns of descendants, often called the “Mississippians” by archaeologists, that dot the lower Ohio and Mississippi River valleys. Most recently, both Alt and Pauketat have teamed up for two new projects. The first involves bringing the insights of Cahokia’s rich farmlands to light, with the support of the National Endowment for the Humanities. The second involves Pauketat and Alt’s joint effort to rethink the relationships between religion and urbanism via major new excavations at the Emerald Acropolis, with the support of the John Templeton Foundation. We hope that these projects will enable all of us to consider or reconsider the causes and consequences of Cahokia as a place and as a historical phenomenon that profoundly affected the histories of many native descendant communities in the Midwest, Southeast, and Great Plains today. Find out more about Cahokia by visiting the

What is Greater Cahokia?

The most extensive and historically significant pre-Columbian proto-urban complex north of Mexico is located on the floodplain of the Mississippi River in St. Clair and Madison Counties, Illinois. Here sit the ruins of the ancient American Indian city of Cahokia, its “downtown” precinct preserved since the 1920s as the Cahokia Mounds State Historic Site. Today, these ruins are visible as a series of grass-covered rectangular, flat-topped earthen pyramids around spacious public plazas. Invisible without excavation are the once-extensive residential neighborhoods of this impressive complex, comprised of many hundreds to thousands of pole-and-thatch houses, timbered public halls, storage huts, temples, upright marker posts, and a Woodhenge. To the south and west of this precinct, the city has amorphous boundaries owing to the variable location and intensity of habitation over the course of the city’s life, from the 11th into the early 14th centuries C.E. Two other impressive precincts, both with dozens of pyramids and thousands of pole-and-thatch building neighborhoods and complexes, are located in East St. Louis and St. Louis.

Many people do not appreciate either the scale of the original complex of Cahokia or its historical prominence in pre-Columbian native North America. But most archaeologists agree that, at one point in the late 11th century C.E., thousands of people lived in this sprawling city (Pauketat and Lopinot 1997). Presumably, hundreds to thousands more lived in one of the dozen or so outlying towns and “shrine” complexes (Alt and Pauketat 2015; Pauketat and Emerson 1997). Another twenty or thirty thousand lived in farmsteads or outlying villages, which appear tohave been ritually and economically organized around Cahokian “nodal” sites (Alt 2006; Emerson 1997a, 1997b; Emerson et al. 2008; Milner 1998; Pauketat 2003). There is no doubt that Cahokia’s central precincts were home to the largest concentration of pyramidal mounds in North America, totaling about 200. Most of these, about 120, were part of the primary Cahokia precinct (Fowler 1997). Some 45 to 50 more dotted the East St. Louis precinct 8 km to the southwest and physically continuous with Cahokia, connected by a row of small pyramids and habitation areas along Indian Lake. Physically discontinuous, but just across the Mississippi River, were 26 more mounds centered on a large plaza located within what is today St. Louis. At each of the Cahokia, East St. Louis, and St. Louis precincts were plazas and other filled and leveled surfaces. The bluff edges east of Cahokia and, possibly in St. Louis, had been sculpted in great labor projects (e.g., Fortier 2007; Koldehoff et al. 2000; Pauketat 2005).

One of largest earthen constructions in North America is not a pyramid at all, but a “Great Plaza” (Alt et al. 2010; Dalan et al. 2003; Fowler 1997; Holley et al. 1993). This tremendous 20-plus hectare flat expanse sat at the very center of Cahokia. Building it was a tremendous earthmoving project dating to sometime around 1050 CE. As a labor project, only Monks Mound, the site’s great central pyramid, exceeded its scale (Alt et al. 2010). Monks Mound, possibly built at the same time as the Great Plaza and a host of other monuments, neighborhoods, and outlying complexes, is the third largest pyramid in the ancient Americas (Collins and Chalfant 1993). It towers 30 meters above the surrounding plazas and residential areas, rising in three principal terraces to the palatial building(s) that had, in the pyramid’s final 12th century form, occupied the summit (Reed 2009). Given these attributes, many archaeologists agree that the people of Cahokia, if not also simply the sheer political and religious power of the place, had a historical impact on far flung groups hundreds of kilometers north, south, east, and west (e.g., Gibbon 1974; Hall 1967, 1989, 1991; Stoltman 2000). That which happened at Cahokia or because of Cahokians mattered a great deal to many peoples of the American mid-continent for centuries to come (Pauketat 2009). Beginning with the 1960 and 1961 excavations into Cahokia’s downtown precinct, the archaeological details of this ancient city finally coming to light (Pauketat 1998, 2013). More recent excavations in the East St. Louis precinct by the Illinois State Archaeological Survey are among the largest ever undertaken in North America, and are dramatically changing how we think of this great pre-Columbian complex.